The fourth edition tournament of the Nigerian Lawn Tennis League sponsored by the Nigerian Communication Commission NCC held in Warri Delta State was on Sunday won by Team Anambra with a score aggregate of six to one.

The promising Lawn Tennis event that was held for the first time in Warri featured a total of 12 Teams identified as blue group and white Group drawn from the six geopolitical zones of the country.

Independent Newspaper Sports Correspondent gathered that Warri was chosen to encourage Team Warri (Team Orofina), Managed by The Orofina Beautiful Feet Foundation which appeared on the league table for the first time in this fourth edition.

Mr Duke Onojeide, the tournament commissioner who came all the way from Lagos while addressing the media expressed confidence in all the teams that participated in the event.

He described the players as young and energetic youths that are bound for greater exploits in the game of lawn tennis in Nigeria and beyond.

Mr Okoh Aihe, Head Public Relations Nigerian Communication Commission the sponsors of the tournament in his address stated that, the NCC is deeply interested in the development and increase of the tempo of career quest of youths in the game of lawn tennis.

Mr Okoh the NCC Ambassador observed during the media chat that, the management of NCC decided to focus on lawn tennis to remove the overcrowded concentration in football and basketball to assist youths who are interested in talent development in lawn tennis which is very attractive. 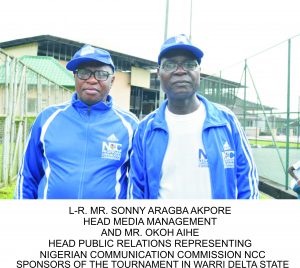 He hinted that besides the talent development and the opportunities opened to players within and outside Nigeria, the NCC will be giving a star prize of seven million to the overall winner team which in his words is a robust commitment of the NCC as part of her corporate social responsibilities. He boasted that the NCC mission is to make  sure that it promotes lawn tennis to a point of enviable heights where players from the league will become Olympic medalist.

The host of the event/Team manager of Team Orofina (Team Warri) Barr. Mrs Ahwin aka Lady-Pro in her speech thanked the NCC, the tournament Commissioner, special dignitaries and respected invited guests who came from far and near to grace the fourth edition of the NCC Sponsored Lawn Tennis League Championship in Warri Delta state.

Barr. Awhin submitted  in her speech that she will ever remain committed to the grooming of talents in the game of lawn tennis which is her primary objective, disclosing that, beside the five hundred-thousand-naira subvention given to the teams, they usually go the extra mile to source for funds to keep the teams afloat in and out of season.

FG assures of jobs for Nigeria